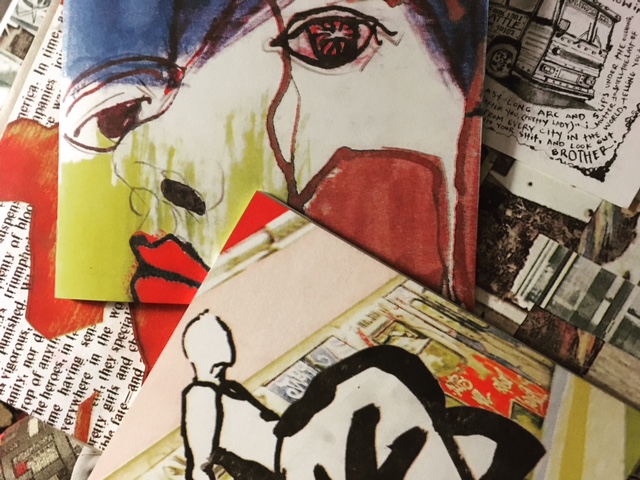 Collages used in chapbooks for Life and Times of American Crow.

On view through September 2

The Gallery at BookWorks currently features an exhibition of the making of The Life & Times of American Crow, a brand new self-published collage novel by Sebastian Matthews, an Asheville-based author and artist. The story of American Crow, a young artist on a journey of self-discovery, is presented in 11 chapbooks featuring the author’s own collage as well as artwork by Aaron Birk, Bill Matthews and Mica Mead.  The exhibition displays the drawings, collages, typed text and Risograph prints by artists whose work appears in the novel. 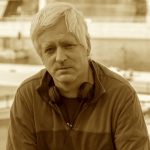 Matthews teamed up with printers Woolly Press to serially publish the novel on Woolly Press’ Risograph Printer—bringing out a new chapbook loosely every three or four months. The complete novel is packaged as a boxed set with a handmade case by Jon Buller, a Hendersonville-based binder. Now available for purchase through the website at americancrowgraphicnovel.com or at BookWorks – the entire set is available as well as individual books. The set also includes a CD of The American Crow Sessions, music written to accompany the story of American Crow by Nashville-based musician, Nathan Bell.

Matthews has lived in Asheville, NC, for seventeen years, working as a teacher, writer, artist and editor. He’s been working on The Life & Times of American Crow for over ten years. Over the last two years, as the project began to come into being, Matthews has collaborated with a number of local artists and printers. His collaborations with Aaron Birk and Mica Mead (at Woolly Press) lie at the heart of the enterprise.

Also featured is Engaging Collage, a presentation of collage-inspired works by the local artists Ursula Gullow, Ginger Huebner, Travis Medford, Brent Skidmore, Ralston Fox Smith and Ken Vallario. A long-time admirer of their work, Matthews invited these artists to join him in honoring and engaging in the spirit of collage.